A homogeneous Markov chain is one that does not evolve in time, that is, its transition probabilities are independent of the time step \(n\) \[p(X_{n+1}|X_n) \text{ is same } \forall n \leq 0.\]

To illustrate we’ll take a look at the water lily example from this Bayesian Methods for Machine Learning course on coursera. 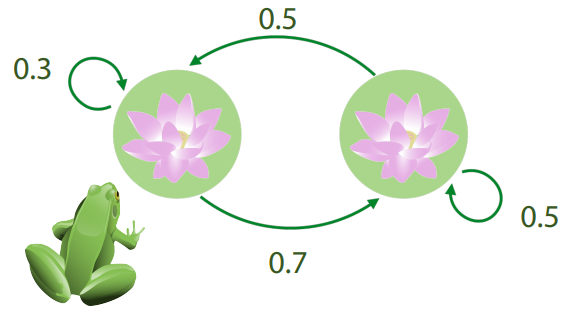 If we let the frog jump as described for a long enough period, it turns out the probability of the state of the frog will converge to a fixed distribution \(\pi\) regardless of the starting state, specifically \(\pi(X=L)=0.44\), \(\pi(X=R)=0.56\). It is an interesting property of Markov chains and we’ll spend the rest of this blog on discussing relevant concepts and applications.

Following the definition on Wikipedia

Here are lecture notes from M3S4/M4S4 Applied Probability (Imperial College), tutorial by Karl Sigman and this question for reference.

If the entire state space forms one closed communicating class, then the chain is called irreducible.

The famous PageRank algorithm is an application of the Markov chain stationary distribution. Each web page can be think of as a state, links to other pages then represent the transition probabilities to other states, and each link on a page is considered equally probable.

Having the states and transition probabilities defined, the process of a person randomly clicking on links can be modeled by such Markov chain. The PageRank algorithm ranks pages according to the stationary probability, which can be interpreted as the probability of arriving at a page through random clicking.

As one can imagine the transition matrix can be very sparse as the number of links on a page is far less than the total number of pages. To ensure that there’s a unique stationary distribution, we can add a [teleportation probability to the matrix to make all entries strictly positive, as described in here (Lecture 33: Markov Chains Continued Further, Statistics 110) and here (How Google Finds Your Needle in the Web’s Haystack). It’s obvious that a stochastic matrix with strictly positive entries is irreducible, hence there’s a unique stationary distribution.

Now we know a Markov chain has a unique stationary distribution \(\pi\) if there’s one closed positive recurrent communicating class, one may wonder how does a Markov chain behave as \(n\to\infty\).

Let’s illustrate the difference between these two behaviours by an example. The matrix \[ \begin{matrix} 0 & 1 \\ 1 & 0 \\ \end{matrix} \] has only one eigenvector \(\pi=[0.5, 0.5]\) associated to the eigenvalue 1. Say a frog start at the left lily, in the next step it will jump to the right lily w.p.1 according to the matrix, after another step, it will again jump to the left and so forth like this video shows :))

It turns out convergence without averaging is a stronger condition than convergence with averaging, to go from the first to the second, a further condition known as aperiodicity is needed for the chain. Discussion about how to check the first property can be found here, a commonly used sufficient condition is irreducible + positive recurrent.

Another commonly mentioned property is called ergodicity, which is essentially having a limiting distribution while being irreducible, more specifically,

It is shown in the book Elements of Information Theory 2nd (Section 4.4) that for any state distributions \(p\) and \(q\), a Markov chain will bring them closer together (at least no further away) step after step in terms of KL divergence \[D_{KL}(p_n|q_n)\geq D_{KL}(p_{n+1}|q_{n+1})\] If \(q\) is a stationary distribution, we have \[D_{KL}(p_n|\pi)\geq D_{KL}(p_{n+1}|\pi)\] which implies that any state distribution gets no further away to every stationary distribution as time passes. The sequence \(D_{KL}(p_n|\pi)\) is a monotonically non-increasing non-negative sequence and must therefore have a limit. The limit is always zero for limiting distributions.

We know a Markov chain will converge to its limiting distribution from any state if there’s one, so when will it converge? For finite state Markov chains, the convergence speed depends on the second large eigenvalue in magnitude of the transition matrix.

For a detailed proof please see Markov Chains and Random Walks on Graphs, and here is a nice animated illustration exponential convergence and the 3x3 pebble game École normale supérieure.

Monte Carlo methods were central to the simulations required for the Manhattan Project during the war. The general idea is to estimate expected values using samples, especially when the exact values are hard to compute analytically \[E_p[f(X)]=\int f(X)p(X) dX \approx \frac{1}{M}\sum^M_{m=1}f(X_m)\] where \({X_m}\) are samples from \(p(X)\).

The core problem is how to draw samples from a given distribution and what property should the samples possess. Usually we would want independent samples, while sometimes using correlated samples can be more efficient and accurate in terms of estimating expected values. We’ll illustrate the difference by the following example.

For detailed introduction of the sampling wheel (low variance resampling) algorithm please see Particle Filters: The Good, The Bad, The Ugly, we only discuss a simplified version here.

Drawing samples from an arbitrary distribution is not easy, especially on high dimensional space, we’re going to see how to use Markov chains for Monte Carlo estimation a.k.a Markov chain Monte Carlo (MCMC).

Further if \(\pi\) is a limiting distribution, \[\pi = \lim_{n\to\infty} P(X_n|X_0) \] then starting from an arbitrary state \(X_0\) then state it’ll be in after the chain converges can be seen as a sample from \(\pi\). Based on these two properties, there are many strategies out there for estimating expected values and drawing (independent) samples, which are not to be discussed in this blog.

It may seem a bit weird that there’s a large probability to remain at the same state at every move because of the acceptance probability. Actually self loops will affect the speed of convergence, but they won’t change the stationary distribution as long as detailed balance is satisfied, it’s analogous to the fact that adding a constant to all diagonal elements of a matrix doesn’t change the eigenvectors.